When I was processing some data using VBA, I noticed that if ~100k class objects were added into a Dictionary (Microsoft Scripting Runtime), the script would stuck for several seconds at the end. If the objects quantity were increased to ~160k, it will stuck for 10+ sec.

After a few tests and searches on the Internet, I found the issue was most probably caused by GC (garbage collection) of VBA. The GC mechanism of VBA is that whenever the reference count of an object drops to zero, the object is destroyed. However, due to unknown reason, such mechanism seems to exhibit a time complexity of O(n²). That is, if the object quantity increases, the GC time will increase drastically. 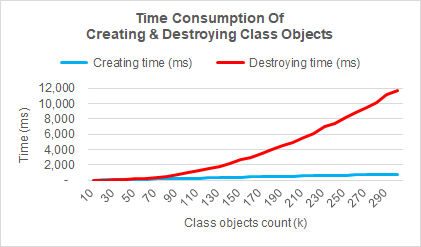 To verify the issue, I wrote a small piece of code to cram certain quantity of myClass objects into a Collection (result as above; code at the end of article). From the chart, it is obvious that while the creating time is linear to object # (blue line), the destroying time is quadratic to object #. When object # reaches 300k, creating only takes 0.8 sec, but destroying takes near 12 sec.

Per further test, other findings include:

As the issue is too foundamental, I could not find any good solutions. Workarounds include:

We use cookies on our website to give you the most relevant experience by remembering your preferences and repeat visits. By clicking “Accept”, you consent to the use of ALL the cookies.
Cookie settingsACCEPT
Manage consent

This website uses cookies to improve your experience while you navigate through the website. Out of these, the cookies that are categorized as necessary are stored on your browser as they are essential for the working of basic functionalities of the website. We also use third-party cookies that help us analyze and understand how you use this website. These cookies will be stored in your browser only with your consent. You also have the option to opt-out of these cookies. But opting out of some of these cookies may affect your browsing experience.
Necessary Always Enabled
Necessary cookies are absolutely essential for the website to function properly. This category only includes cookies that ensures basic functionalities and security features of the website. These cookies do not store any personal information.
Non-necessary
Any cookies that may not be particularly necessary for the website to function and is used specifically to collect user personal data via analytics, ads, other embedded contents are termed as non-necessary cookies. It is mandatory to procure user consent prior to running these cookies on your website.
SAVE & ACCEPT