In Oct 2018, Microsoft released the new MS Office 2019. The overall UI design changed little, but this version could be the worst in the past decade.

A typical ribbon in Office 2007

Ribbon is such a successful design that it survived over a decade.

Take a look at the ribbon design of Office 2007-2016. A common characteristic is that the tab and the tools area are clearly separated (full width) — either by a line or by colour difference. But in Office 2019, only current activated tab is underscored while other tabs are indistinguishable from the tools area due to the same background color. Lacking boundary leaves the user in confusion and hesitation when clicking/touching tabs due to fear of accidentally clicking onto the command buttons below (though there is actually a wide gap between).
On the other hand, lacking of boundary above the tabs in old versions does not cause such fear, because accidentally clicking onto title bar is unlikely to trigger any unwanted commands (unless you click onto the quick-access buttons).

To make it worse, Office 2019 changed how tabs response to mouse hover. In old versions, when mouse hovers over a tab, the tab changes its border or background as an indication. However, in Office 2019, the indicator is the tab text style switching bold (a bit wider) when hovered. The background colour does change, but the difference is so subtle that it’s hardly distinguishable. Combining with lack of separation line as mentioned above, the ribbon tab design in Office 2019 is clearly badly-designed.

This is not a notable issue. But since I commented on ribbon tabs above, I’ll also mention the ribbon height.

The most notable UI changes are those command icons on the ribbon. The line-and-shape style in old versions is switched to an outline style.
At first glance I thought I accidentally turned High Contrast option on, until I realised the Office UI was updated (I subscribed to Office 365). 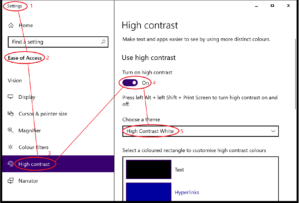 For you information, High Contrast option is one of the Accessibility features for special people with visual difficulties. Even in Win98 there was already high contrast color scheme. 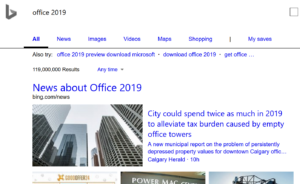 I heard that Microsoft was adopting "Fluent Design" recently, but didn’t expect such strange design. I checked the docs and, okay, it is really part of the Fluent Design.

The Fluent Design suggest to Be Inclusive

Caring for special people is a humane idea. The problem is the outline style icons increase pain for ordinary people.

Firstly, the outlines & fill is less expressive and flexible than the combination of lines & shapes. New icons looks similar while the old ones are more diversified.
Secondly, the outline style requires heavy stroke (2px in 200% scaling) while line-and-shape style may used lighter lines (1px in 200% scaling). This could be the reason that the tools area in Office 2019 is taller than the old versions.

Combining these two points results poorly-designed icons. For example, the Align Left/Center/Right/Justify icons now have much wider line spacing and resemble Bagua (the Eight Trigrams). It becomes overly obsessing when several 4-line icons with large line spacing are gathered together.

While the outline strokes style is more patent in Office 2019, the color of text under the group is surprisingly paler (nearer to grey) than the old versions, which seems contrary to the accessibility inclination.

In short, the new design of Office 2019 is quite odd and less efficient. For a tool of productivity, such design is obviously a fail compared to successful creative designs of the former versions.

We use cookies on our website to give you the most relevant experience by remembering your preferences and repeat visits. By clicking “Accept”, you consent to the use of ALL the cookies.
Cookie settingsACCEPT
Manage consent

This website uses cookies to improve your experience while you navigate through the website. Out of these, the cookies that are categorized as necessary are stored on your browser as they are essential for the working of basic functionalities of the website. We also use third-party cookies that help us analyze and understand how you use this website. These cookies will be stored in your browser only with your consent. You also have the option to opt-out of these cookies. But opting out of some of these cookies may affect your browsing experience.
Necessary Always Enabled
Necessary cookies are absolutely essential for the website to function properly. This category only includes cookies that ensures basic functionalities and security features of the website. These cookies do not store any personal information.
Non-necessary
Any cookies that may not be particularly necessary for the website to function and is used specifically to collect user personal data via analytics, ads, other embedded contents are termed as non-necessary cookies. It is mandatory to procure user consent prior to running these cookies on your website.
SAVE & ACCEPT